What is a footprint?

Life is like a bird's footprint on the snow, said an ancient poet.

Yet it is not the same as a man's footprint.

When we have a road,  its nowhere we can't go.

And this is the new insight from a new country.

Seems to be a bird's footprint.

She would left her mark on the snow,

And gone without caring her direction.

The foot-prints of a giant

What is the meaning of China ?

9269  What is the meaning of China   20201221
This is a very strong message for the whole world. At the first glance, it meant getting rich is not only possible, but can be a very quick process. You will be rich in no time. And that is the impossible dream for the people in urgent need. Numerous countries are in great trouble of poverty or in the danger of going downward.
And China is not only a sample of getting rich; it is also a sample of possibility.  The Chinese seems to be an able nation. They can do many things. They can build hospitals in days and handle the virus problem more easily than many places in the whole world. And now they are trying to go to the moon.
What kind of message is that?
Can my country be rich also?
What is the real meaning behind the message?
The message is really, really encouraging. Wise people around the globe have been pondering and got the message already.
It meant only one thing at first. And that is the most important one.
That meant to be rich is possible. It is not an impossible dream. If the Chinese can do it, we can do it. It was said, nothing is impossible, but that was only a vanity and now the vanity had become true.
And the next question is how.
How can we be rich?
The author would like to share a few points here.
1. To tackle the problem with the effort of a whole nation. That meant think in the units of a whole and not in individuals. That meant not to be selfish. And if you are not selfish, you will be honest. Being honest is important to success.
2. Balance your brain. Use both sides of the brain, not only can you manage details with the left side, but also use your instinct from the right side. If that meant you need to learn some Chinese, why not. A strong spirit can do it.
3. That meant if you wish to harvest the fruits like the Chinese, you need to grow a tree. And if you are not selfish, you can start from the very beginning, and you will realize it will not be an instant success, but it is a possible success.
Posted by Leechard 李察 at 12/21/2020 沒有留言:

Someone had put illegal pop-up before my blog.

When they cannot present a better idea, they play dirty tricks.

It is completely save to view my blog.

Any suggestions are welcome. 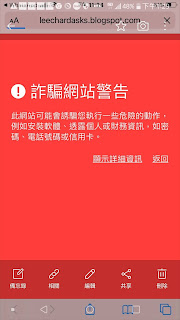 RIDING ON A HUGE ROCK

What should be sent before the three armies?

Life and death is a long chain of links, It is infinite.  Confucius said, "Life is not yet even known, knowing death is a question of impossible." Missing and avoiding the link of death, it is even more difficult to understand life.

Recently, small cockroaches are common in my  house. I suddenly awared that their lives are based on generations. They would pass down from generation to generation vigorously.  Death and life are just a small part in the whole course of cockroach life.

Every cockroach is desperate to survive, but from the perspective of generations, individual death and life are completely trivial.

May be they all know that the next generation will have stronger vitality and their genes will be more perfect. The speed of human insecticide development is not as fast as the evolution of cockroach genes 😄😄

This is what I thought of on my 72 birthday.